NPM is the official package manager for the NodeJS ecosystem. Since the first release of NodeJS it has come with NPM built-in. The initial release date for NPM was 12 January 2010 and since then has grown into the Worlds largest software registry.

I would expect most engineers in the JavaScript ecosystem to know all about either NPM or Yarn, as they are critical to most local, CI and CD flows. However in the overview section I am going to cover the core functionality, as this is what we will focus on building later.

A video for this talk can be found here. Part of my "under-the-hood of" video series here.

There are 3 parts to NPM

The CLI is open-source code available on Github. It is currently on version 7 and has had over 700 contributors. The CLI commands are NodeJS scripts and require the format npm <command>.

You can point the CLI to any registry e.g. npm adduser --registry http://localhost:4873

The most popular commands are: 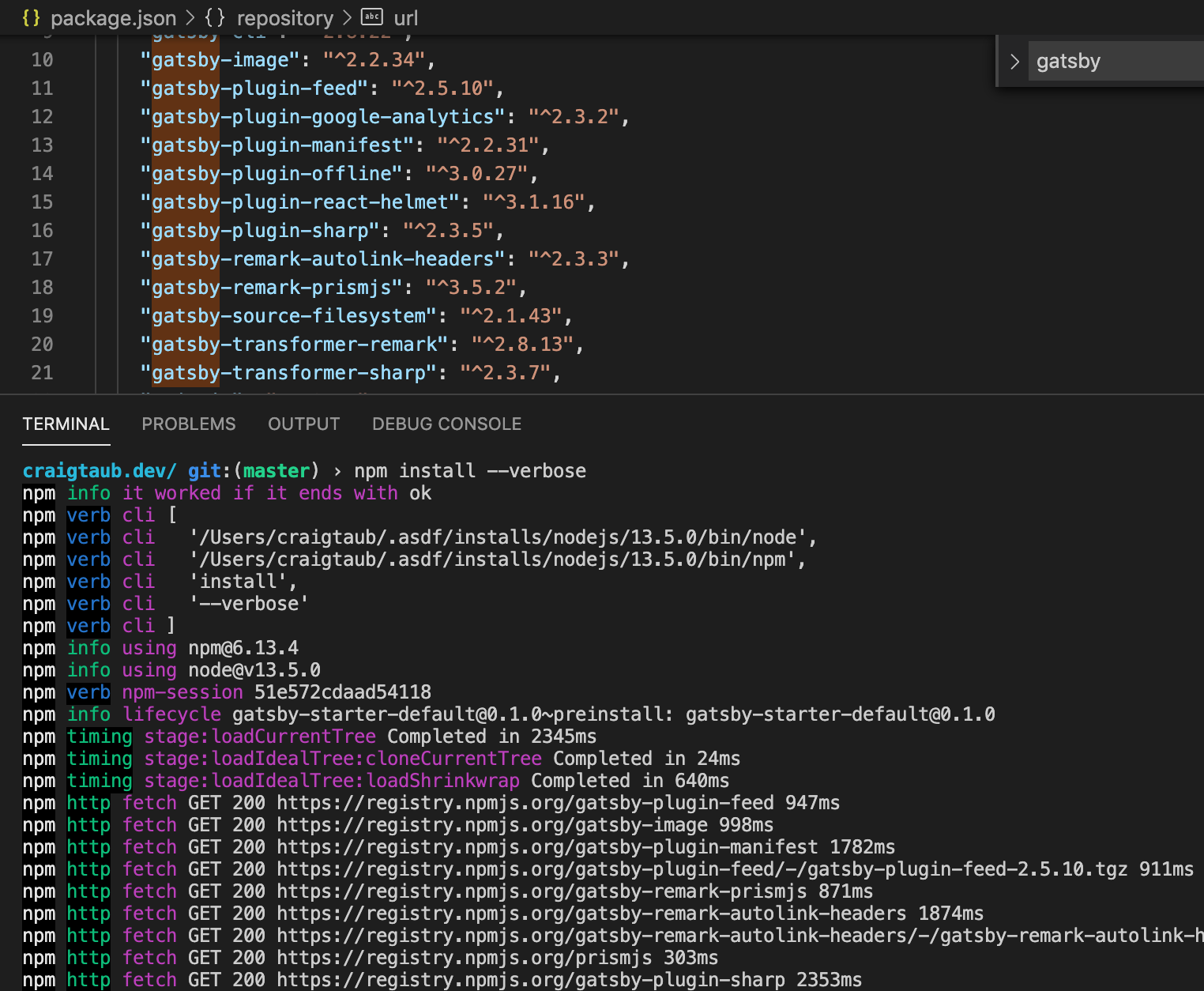 Generates package-lock.json - describes dependency tree that was installed. For deterministic installs (subsequent installs). If it exists, the install is driven by that. The lockfile stores an 'integrity' hash for each dep. Ths hash (checksum) is of the package tarball uploaded to registry. Can be SHA-1 (older NPM) or SHA-512 (newer NPM). Its akin to a Subresource Integrity used in HTML/browsers. 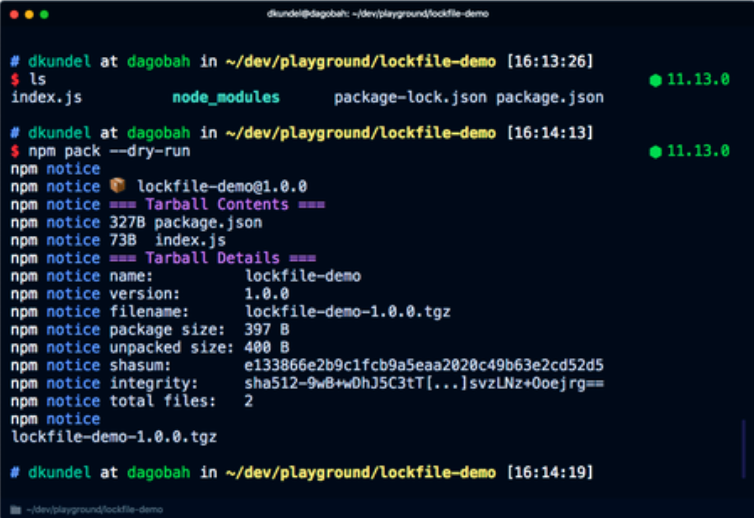 Large public database of JavaScript packages and the meta-information surrounding it. Versioned like git.

Uses Apache's NoSQL database Couch DB to manage publicly available data (it offers good storage performance and replication). It has database for "users" and one for "registry", the latter holds the packages.

It uses Couch DB's attachments for package tarballs. It is incredlby easy to upload or download an attachment from Couch, simpler than most other NoSQL.

Couch naturally exposes HTTP endpoints which means it has an API built into it by default. For auth there is a /_session endpoint (to create a new cookie-based session) or it accepts an Authentication header for basic auth, both natively. Using design document Rewrites (see below section) you can build redirects to different parts of the database

Couch DB is very dynamic in that it allows you to create a kind of schema called a "design document" for a given section. This can include javascript functions (yes it can store and run JS code internally) which execute at given events e.g. Updates is list of functions which run when a document is updated. It also allows Views which are function that take document data and produce searchable lists of information based on the document's contents. There are other types of dynamic mechanisms, more details here.

The Couch DB tables and API for registry details are here (a repository for Registry documentation). Couch DB views used by the Registry are found in npm-registry-couchapp. An example Docker image for their DB setup is npm-docker-couchdb. It details how to update a local NPM client to use a local CouchDB registry (here), example below.

Some apps use the popular lightweight private proxy app verdaccio, for many reasons one of which is independent caching incase NPM is down.

Found at https://www.npmjs.com/, a domain first registered on 19th March 2010. It is built using Webpack, React and Lodash. Its assets are served via CDN CloudFlare. Any payments are processed via Stripe.

Connects and reads data from the registry Couch DB instance.

Packages are located at https://www.npmjs.com/package/<package name>.

The README markdown file is loaded as the landing page content with markdown rendered as HTML.

NPM also shows a load of other information such as the weekly download number, latest version, unpacked size and github location.

A module is a file or directory that can be loaded by Nodejs, located inside node_modules.

CLI packages are not modules, they cannot be loaded by NodeJS until unzipped into a folder first.

2 versions of the same module can exist (module@1.0.0 and module@1.0.1) and they will not conflict. Generally npm packages are modules, loaded via require() or import

3: Building our own NodeJS package manager

We will be building an app which includes all 3 aspects of NPM.

The aim is to get a basic PoC which will work for all 3.

Using an example-lib (a small package which returns some text) and example-app (a small express server using the previous package) we can test it works.

Wrapping all of the above in a single mono-repository with multiple packages.

For this we will use the default couchdb Docker image. It includes a basic unauthenticated CouchDB instance.

We will use docker-compose to set up our apps.

It does not need a volume mounted or anything else at this point.

We will use a Makefile to assist in running. We start by building and creating the registry database. Later I added a stop and reset so we could kill the docker application and reset the database quickly.

Opening the browser confirms the database and couchDb instance exists

Located in our monorepo in packages/cli/. We will only be creating 2 commands for this PoC.

Using bin means inside the packages/cli folder we can run below:

And from any directory in a terminal we can run the commands like this.

I could have chosen to split these into a single script and use arguments, like the real NPM, but it did not seem worth it for this PoC. If I had gone that route I would have used yargs.

The code is here.

Located under packages/website we will use Docker to create a basic NodeJS website.

For a request to the /packages/:package-name url

If no package is found a nice message is printed.

Lastly we will add the website to our docker-compose.yml so we can run it with the registry database.

We now have 3 of the core 3 jobs carried out by NPM, so we need to test it works using an example application and example library.

The library will just return a string.

The packages/example-lib/index.js is below, it just returns a string.

It will print information from a real library (e.g. express) and our example library.

Our packages/example-app/package.json looks like this. As mentioned the version is ignored for our PoC.

Lastly we update the reset in our Makefile to also remove the package installed and uninstall the global binary commands. The final file is below:

So thats it 🙌, our mini NPM works.

I encourage anyone that is interested to check out the code and play with the mechanism yourself.

As mentioned there is functionality to each of the 3 core elements to NPM which we have omitted from our app. Some of those are:

Thanks so much for reading, I learnt a huge amount about NPM from this research and I hope it was useful for you. You can find the repository for all this code here.